After an exciting time with new developments in Second Life, there now is a time ofÂ boredom in 2L. No new experiences at all. Revisiting The Black Sun, there is a large protected area around the castle, so I could not enter. MaybeÂ the time zone differences play a part in it, but I never see anyone at the Black Sun club. Uvvy Island is also empty most of the time. I missed Anders Sandberg’s lecture “Keep raging against aging”, but currently there seems to be no follow-up plans. Seems that Second Life is beyond the hype. That is, of course, why Linden released the clients source code under theÂ GPL free software license at 8 january.

Looking for another virtual world? DotSoul isn’t half as beautiful and even more deserted. The new virtual world, Multiverse, is still in Beta version.

So, I went to Black Sun and followed the road until I came at the end of the land that is obviously property of IntLibb Brautigan. 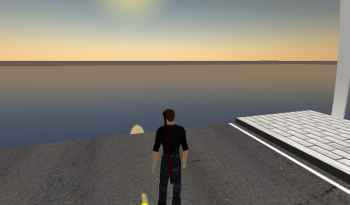 Well, that was it! So I flew back and followed a road not taken before. There I found this place; it looked like a dumping ground: 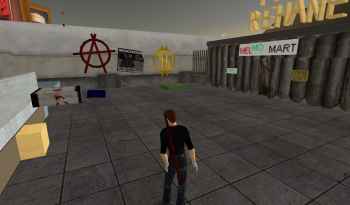 Okay, again back to the place I know so well, Black Sun. There, next to the Pearly Gates church (I presume) I found a Billboard with an ad for the Nangrim Plaza Mall. So I chose “teleport and there I was. 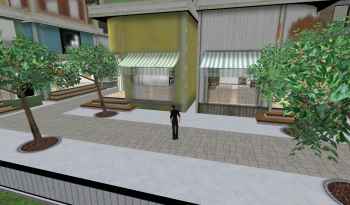 Interesting. But again: no-one there and the shops were closed. What next? Dublin? Why not. Today even Dublin was completely deserted. I strolled through Grafton Street and there I stumbled upon an empty guitar case and a Busker’s row, before the music store of Elmo Balderdash. Busking is playing music on the street for tips. Tips? Money? L$$? So I right-clicked the mat and chose “Busker”. 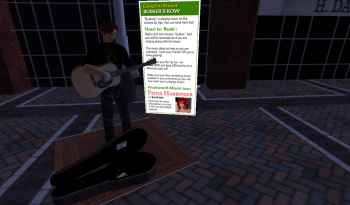 Hm. not bad. However, no audience, no tips. So, even this could not satisfy me for longer than 20 seconds. So, back to the real world. 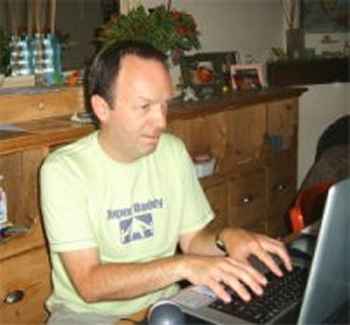 Posted by kuehleborn on January 11th, 2007 Posted in Metaverse Tagged as: second life