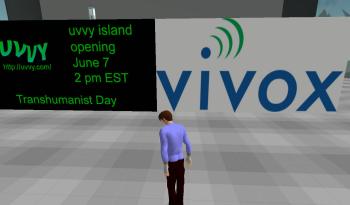 On wednesday the event took place that was one of the reasons – if not the only reason – for me to sign up for a second life account: the first conference on transhumanism in a VR environment. Powered by Vivox it became possible to communicate with each other not losing time by typing your thoughts – and correcting your typos -, but by simply talking and listening. Hopefully Vivox or similar software will be integrated with Second Life in the near future. Earlier that day I did a short try out and Vivox worked perfectly, the quality of the sound was very good. But arriving at the meeting at 19.00 (GMT) some people were chatting in the old-fashione way 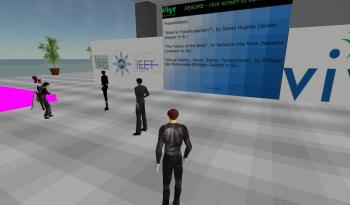 while Giulio Perhaps and the Vivox staff were desperately trying to get all participants ( 30 to 40 people channelled in into the microphone, the white column after the third person on the pic. 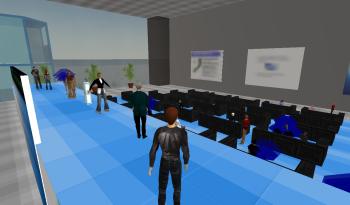 This took more than an hour of patient waiting for me; you see me here sitting in the foreground. 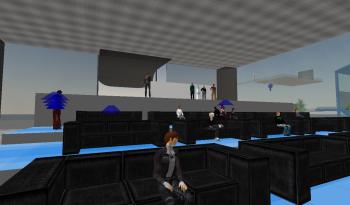 (for young people VR is so real, that one of my daughters compassionately remarked: “You’re sitting there all alone!”, while I was IRL with her in one room behind my notebook :-)Â )
I attended two lectures: first James Sleeper (RL name: James Hughes) 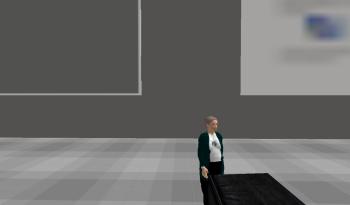 with a thought-provoking lecture on the future of transhumanism, “the world’s most dangerous idea” according to Fukuyama. Not many news for me, but, since there were also people present who are not involved in transhumanist ideas, I think a very good effort to get transhumanism accepted among less forward-looking people. Lectures were illustrated with power point presentations, that were a bit difficult to read. 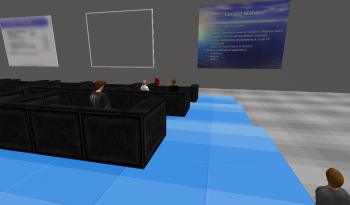 Philippe Golding (RL name Philippe van der Nedervelde) lectured on VR and started of course with mentioning Neil Stephenson’s “Snow Crash” as coiner of the term “Metaverse” and sketched the next step, as outlined in Stephenson’s “Diamond Age”. Just when I realized I’ll have to reread those books, Vander Nedervelde proceeded on the path and sketched the possibilities of utility fog and finally to the point where VR is a one to one simulation of the real world, where a virtual handcuff is a handcuff and a virtual bullet is a real – lethal – bullet As a consequence of the delay I had to leave after the second lecture, so I wasn’t able to participate in the Transhumanist Party. However, it was fascinating to stand at the cradle of advanced VR, a baby that will grown up very soon. Within five to ten years our lives might take place in VR half of the time.

Posted by kuehleborn on June 10th, 2006 Posted in Metaverse Tagged as: second life,transhumanism