September 14 is Hobbit Day. Why? Because it is the birthday of both Bilbo and Frodo Baggins, the Hobbits from Tolkien’s “The Hobbit” and “Lord of the Rings”. In fact, both were born on September 22, but due to discrepancies of the Shire Calendar and the Gregorian Calender some Tolkien fans have calculated that the corresponding date is September 14.

I started reading Tolkien when I was 17, first, of course, “The Hobbit”, then “Lord of the Rings”, but that took some time: I succeeded only at the third effort. I got stuck halfway “The Silmarillion” – too many names. However, I liked the Tolkien biography by Humphrey Carpenter, and later, when I studied the art of calligraphy, I practiced with the poem “A Elbereth Gilthoniel” (in Elvish). 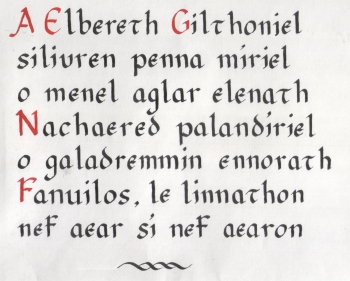 Tolkien’s books are definitely for Geeks, but Hobbits apparently not. In Stephenson’s “Cryptonomicon” you find at page 80 the following quote:

In the Tolkien, not the endocrinological or Snow White sense, Randy is a dwarf. Tolkien’s Dwarfs were stout, taciturn, vaguely magical characters who spent a lot of time in the dark hammering out beautiful things, e.g. Rings of Power. Thinking of himself as a Dwarf who had hung up his wax-ax for a while to go sojourning in the Shire, where he was surrounded by squabbling Hobbits (i.e. Charlene’s friends), had actually done a lot for Randy’s peace of mind over the years. He knew perfectly well that if he were stuck in academia these people, and the things they said, would seem momentous to him. But where he came from, nobody had been taking these people seriously for years. So he just withdrew from the conversation and drank his wine and looked out over the Pacific surf and tried not to do anything really obvious like shaking his head and rolling his eyes.

Just a way of coping with your geekiness in a “normal” world.”

Posted by kuehleborn on September 13th, 2007 Posted in Geeks Tagged as: Geeks