Brian Eno’s latest artwork, 77 Million Paintings, is a constantly evolving sound and imagescape which continues his exploration into light as an artist’s medium and the aesthetic possibilities of “generative software”. It is “visual music”. Concurrently with the North American premiere of Brian Eno’s Art installation at Yerba Buena Center for the Arts , at June, 29th the Second Life version of 77 Million Paintings was launched. It was a project by – among others – AngryBeth Shortbread, who reported about the project at her weblog. I visited the Art Centre In World, but the event was over.

There was another exposition “Organizing light in the time and space of the projected image” (the determination of an Image-Space) by Brad KLIGERMAN [Kliger Dinkin] with the help of Jamil MEHDAOUI [Bounty Gandini] & Claire GASTEUIL [Paquerette Gabreski]. “From the catalogue:

The exhibition attempts to engage visiting avatars as project participants. By interacting with the installation infrastructure, they will actualize its content. 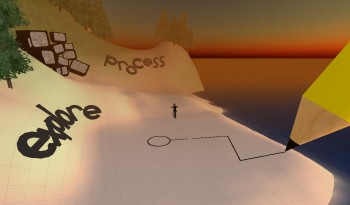 What does it mean to Make Art in Second Life? A project that construes its physical material context – the local and global qualities inherent to a synthetic space – as both content and form, expressive media and meaning.

As a model of the artistic process, the exhibition functions on two levels: First it construes a built environment to effectuate a synthesis of the text & spaces, images & ideas, defining the projects broad range of interests…

Second, to engage visitors to become project participants, an integral part of the dynamic creative process. 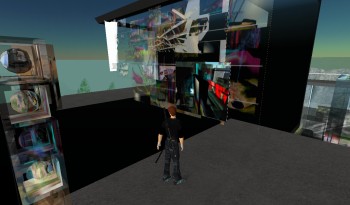 Each machine has two potential states: Edifice, the formal structures needed to extract and define this information.

Each machine has two potential states, as an: Artifact, the material forms and spaces emerging from this experimental procedure, capable of representing that which is revealed.

The image projects the space, the space becomes image. Image resonates on its surface, through its envelope and beyond its physical reach, to capture, through the distribution of space, its tangible atmosphere. 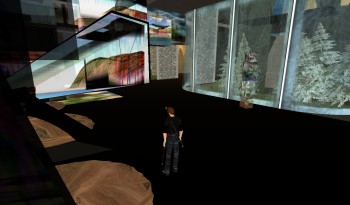 Discover rules of materiality inherent to this world, and represent them through the network of form and space that has unfolded within, around and because of these machines.

Okay, that is the philosophy of Second Art. Actually more in the shop display than in the store…

Posted by kuehleborn on July 11th, 2007 Posted in Metaverse Tagged as: second life