Another day in the paradise of Â Second Life and there was a message about the World Stock Exchange.Â  Well one of the things I want to find out in Second Life is how economics could work in a world without government, so I teleported to the ATM, to create an account. Unfortunately I had misunderstood the instructions, so initially it didn’t work.While I was thinking about what went wrong; I received an IM fro Giulio Perhaps; I teleported to Uvvy. I thought the Island was lost for transhumanism, but he showed me the new auditorium. 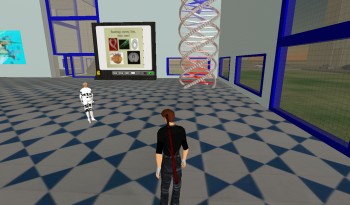 Well, it wasÂ awesome and I think better than it was. Giulio is in the process of organizing a seminar on transhumanism and religion, and now almost full-time occupied with SL development. Must be great to earn your daily bread in SL. Busy with his plans, he had to move on to work on his projects, leaving me the possibility to return to Friedman (Link works only with Second Life client)Â  and to find out how I could create my WSE-account.

The teleport simply hadn’t brought me to the entrance of the venue: just round the corner was the building: 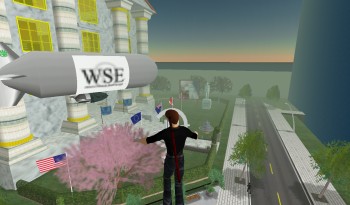 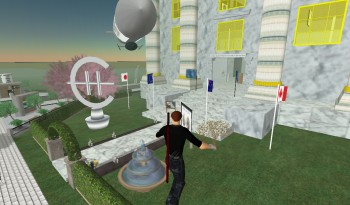 It was quite crowded inside and it looked like a real-life stock exchange building: 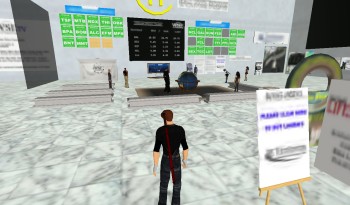 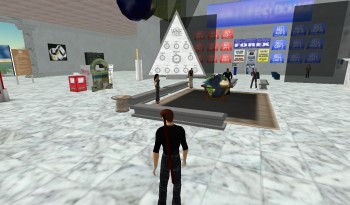 Now I made my second mistake: in a far corner of the hall I saw an ATM. 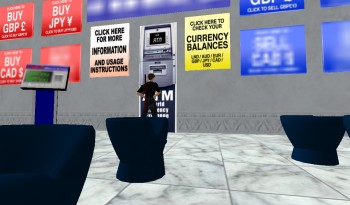 I created an account and payed L$20 to the machine. Not very much, but the WCE speculates on (real) world currency exchange. As a rule for myself I never put money in something I don’t understand, so after I found out about the misreading WCE for WSE, I became a little nervous.Â  I took me some time to undo my payment.

At last I found the WSE ATM. I had to wait for my turn – obviously I’m not the only one who is interested – but finally I succeeded in creating an account. So the next few weeks I’ll be an active participant of the Second Life Stock Market.

Posted by kuehleborn on March 16th, 2007 Posted in Metaverse Tagged as: second life,transhumanism